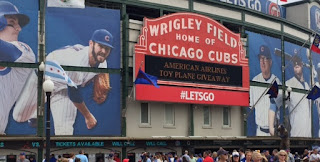 Anyone seen any pigs flying?

Has hell frozen over?


A lifelong Cubs fan, I know the drill. There are periodic bursts of brilliance followed by the more frequent theatrics of the absurd. If you looked hard enough you could find a reason to keep watching, to hold out hope. Failing that, it was an opportunity to get a nice tan sitting in the bleachers.

But not this year.

This year, the Cubs are a team of youth: boys who either don't understand or don't care about the history of the curse of the billy goat, the black cat, the attempted capture of the foul ball by the man who shall not be named.

But there is also some experience. A few baseball veterans who can impart some wisdom to these young upstarts who don't know any better. But not too much wisdom to freak them out. To quell their fighting spirit. To put the hex on their natural athletic abilities.

The Chicago Cubs this year are a magical team, led by a savvy manager. Embraced by a hungry fan base.

They're fun to watch- rookie after rookie making play after play, hitting balls out of the park, rubbing their caps in solidarity. You've gotta love these guys.

I'm ready for a World Series run at Wrigley.

But this year, I really mean it.

Posted by Unknown at 7:46 PM No comments:

I now have a Facebook page to keep everyone posted on the goings on of my books! Search my name (Lisa Nielsen) or go to https://www.facebook.com/Lisa-Nielsen-478063095686575/info/?tab=page_info and like my page to keep up with any new news, as Bygones will be coming out soon from Coffee Town Press. Thanks!
Posted by Unknown at 6:04 PM No comments: